Eagles’ Season Comes to an End

Byron Cole Watonga Eagles Football Asst. Coach
Body
The 2020 Season came to a conclusion in the first round of the playoffs on Friday. The team made their way to Dibble with a chance to rewrite history. The Demons scored first after the Eagles went backwards on their opening drive, due to penalties and a blocked punt in the endzone that had to be kicked out of bounds for a safety. The opposing team added a touchdown after a long push, taking up most of the first quarter. 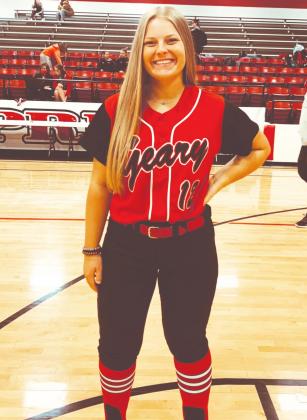 Provided By Vype Sports
Body
Maggie Glasgow is a sophomore at Geary High School and is very active at school and in her community. Glasgow is active in student council, serving as class president. 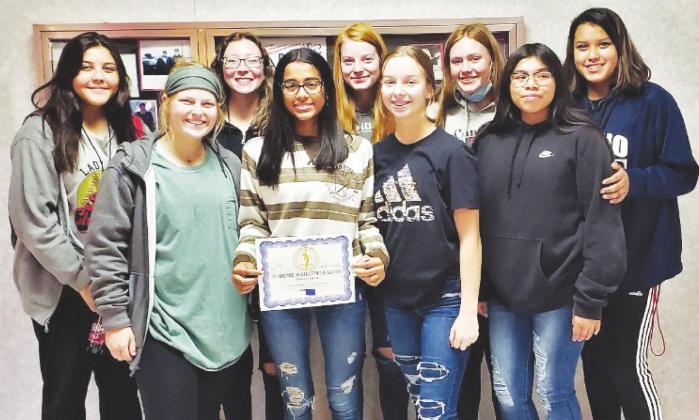 News Staff
Body
The Lady Bison fastpitch softball team was recognized this week by the OSSAA with an Academic Achievement Award. This year the team posted a combined GPA of 3.8. This award comes on the heels of a successful year for the Lady Bison, who ended their season 18-14 with a District championship. According to first year coach Rick Scott, “These girls are taking care of business both on the field and in the classroom. They are a great group of young ladies who are doing an awesome job of representing both their school and community. I am so very proud of all their hard work,” . The team featured youth this past season with only one junior, seven sophomores and three freshmen. They have the potential to build upon the success of what was started this past season.

Byron Cole Watonga Eagles Football Asst. Coach
Body
In their regular season finale, the Eagles traveled over to Hinton to take on the Comets in a battle for playoff position. The Eagles were coming off their first victory of the season, and were looking to add to it against a team with the same record. After a quick 3 and out by the Eagle defense, the new look offense took to the field, and Joe Jackson made a statement, taking the option himself for a 45 yard TD. The Eagles defense came back out and continued to put the pads to the Comets big tailback, keeping them at minimal gains throughout the game. Although they scored, the opposing team had to use the majority of the quarter just to cross the goalline. 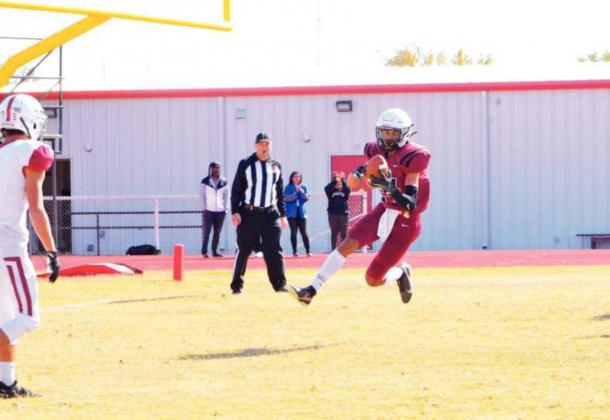 Byron Cole
Body
It took an ice storm, power outages, and a push to a Saturday afternoon game for the Eagles to get their first win of the season. The Watonga Eagles took on another Eagles team from Oklahoma Christian Academy in Edmond for their last home game of the regular season, which happened to also be Senior Day. Aaron Perez, Nic Mata, Kannon Kearney, Brendan Cole, Junior Clay, Luis Mata, Kyle Brown, Kerby Easter, and Tucker Estep stepped onto the field for the final time at the Eagles' Nest and wanted nothing more than to go out with a win. The team came out firing off the ball on offense, and on a quick catch from Perez and pitch to Chris Sanders, they were off for an apparent score. The touchdown was wiped out, due to an illegal forward pass. The offense continued to push, but lost the ball on a strip by the defense near the goalline. The Eagles defense came out and did something that they haven't done all season, swarm tackle. On fourth down, the opponent's snap went over the head of the quarterback, and the Eagles attacked, led by Kannon Kearney and Elijah Lauminick, resulting in a huge turnover on downs. Nic Mata took a run for his biggest run of the season, but penalties forced the team backwards, causing the offense to stall. The teams went back and forth without a score, with only Kearney's interception against the opposing team being one of the few highlights of the half. 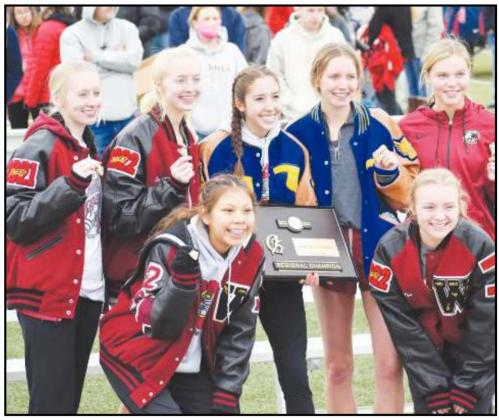 Eagles Qualify for State at Regionals

Provided By Brenda Geels
Body
The Eagles Cross Country teams made the long trip to Keifer Oklahoma to qualify for State at their Regional Cross-Country Meet. It was a cool overcast day but that did not dampen many Eagle runners as they set many personal best times.

Provided By Brenda Geels
Body
The Watonga Eagles traveled to Chickasha last Thursday, Oct. 15th, to compete in the season finale known as the 27th Annual Oklahoma Junior High Cross-Country Championships. The event was held at the Chickasha Sports Complex and with the final races for the 2A, 3A, 4A boys and girls. 5A and 6A were held the following day.

Provided By Brenda Geels
Body
With the last two Cross Country meets of the season fast approaching the Watonga Eagles Cross Country Teams spent the last 3 weeks tuning up for Regionals and the OSSAA 2A State Meet. The Lady Eagles have been ranked #1 and #2 in the State and are in a familiar battle with the Hooker Lady Bulldogs. Last year the Lady Eagles edged out the Lady Bulldogs by 1 point to win the 2019 2A State Cross Country title and this year’s meet will no doubt be a classic battle. The Eagles are rebuilding their team with just 2-4 runners on the team the last 2 years. Never the less, Senior Cy Walters has continued to improve over the past 2 years and is the Eagles top runner consistently finishing in the top 10 overall during this season.

Byron Cole Watonga Eagles Football Asst. Coach
Body
High School Football The Eagles traveled to Crescent for a must win engagement with the Tigers. The Eagles defense got off to a rough start, allowing Crescent to move the ball on the ground before stopping them after a long series.

News Staff
Body
The Geary Lady Bison look sharp at the first scrimmage of the season against Fort Cobb’s Lady Mustangs on October 13..
Subscribe to